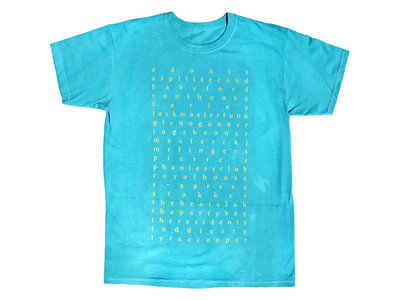 Dedicated to the only essential video in any collection, this hand made heavy cotton tie-dyed and silkscreened t-shirt by ateliersdenudes.com is a fan collaboration between A Jackin Phreak & Mental Groove Records.

Initiated by Rhythm King Records in 1988, the original video mixtape is one of a kind. Glenn Gunner & Jagz Kooner teamed up and created the first 30min non-stop music mix. Including bits, samples, and reworked edits of the emerging acid tracks from Chicago and the UK, their sound journey transports you directly to the acid rush, typical of the year 1988, which would revolutionize club culture.

But experimentation was not only sonic, but visual too. At the controls of their Fairlight CVI graphics machine, Stakker (Mark McClean, Colin Scott & Brian Dougans, originally visual art students) created the program's awesome moving and vivid technicolor visuals. The futuristic spirit which predominated during the 80s in the Electronic Body Music scene reached with this video its visual and sound pinnacle: a masterpiece! Robotic and psychedelic, powerful and abstract, colorful and fast moving effects, this is the essence of ACID HOUSE!

If you aren't already a lucky owner of one original copy, you can xperience the original video here : youtu.be/vz6DszGdZIM

GET IT ON and GET WITH IT

Before ordering, please be aware and accept that, because of the techniques used (hand-dye and silkscreening) , little defaults could occur and are accepted as normal (this is not H&M type of products, hence the price :).