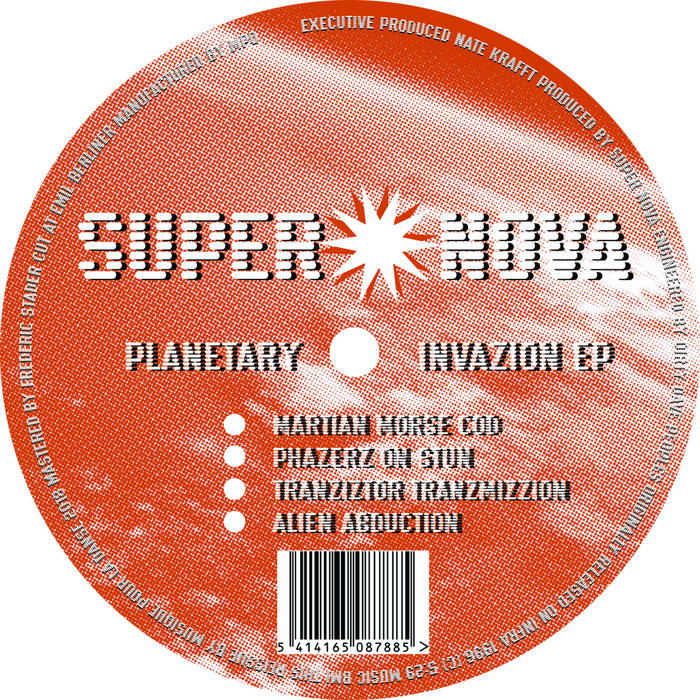 The latest release by Musique Pour La Danse is a reissue of a rare and cult record, Super Nova’s Planetary Invazion EP. It is part of a 4 EP reissue series of Nate Krafft's music under several aliases (Super Nova, Naquil). Originally released by Infra in 1996, this is an off-kilter EP that should be filed under techno / electro / Detroit but that also goes beyond these categories.

Behind SUPER NOVA is Nate Krafft, a producer from the Mid West with only a handful of releases under different aliases. The Planetary Invazion EP sees the artist explore uncharted territories, disregarding common dancefloor tropes to instead take the listener to new and wonderful places. If there ever was a record way too far ahead of its time when it initially got released but that deserves a second chance because its aesthetic is remarkably relevant these days, this is it.

A1 Martian Morse Cöd
The record opens in a haze of sounds of an electronic nature and an almost pastoral inclination. As any good overture, this tune sets the mood for the record with its uplifting feel, like when clouds finally part to reveal the blue sky after a dark storm, and this is what makes this euphoric and dreamy half-step tune so special.

A2 Phazerz on Stun
This is one of these tunes that gives you goosebumps and activates the trip memory. Using a limited palette of ascending and descending bleeps and melodies layered over simple but dance-inducing drums with a live feeling, this is indeed a track stunning in its efficiency and a great example of less is more.

B1 Tranziztor Tranzmizzion
Further destructuring the usual dance music grammar, this is perhaps the most leftfield tune on the record, a tranzmizzion from another world. Somewhere between futuristic broken beat and leftfield mutant jazz, Supernova reduces drums to just a few elements so that a beautiful lead arpeggio may shine, giving the tune a dusky and majestic feel, while lovely FM synthesis sounds give a floaty, almost aquatic vibe to the mix. Simply otherworldly.

B2 Alien Abduction
1000 fathoms deep dub-infused electro that turns into techno, anyone? That is, in a nutshell, what this EP closer delivers. Once again stripping the drums to the bare minimum without, however, turning his back on inventive programming, Super Nova lets a quintessential dub techno stab evolve and dissolve, the perfect soundtrack for abducting the bodies, minds, and souls of dancefloors that want to believe, as the saying goes.

Keep an ear out for more forgotten and unforgettable reissues from Musique Pour La Danse in the coming months with early braindance from Switzerland (92), wave and New Beat from Belgium (86 - 90) and breakbeat house from the UK (90).